How should we as Christians understand God’s creative work? Is it okay to have no quarrel with modern science?

Must the days in Genesis be literally taken as twenty four hour days?

These questions have divided Christians ever since Darwin's famous voyage on the HMS Beagle. Darwin became convinced that all life on earth had evolved slowly by a process of natural selection. This means that life forms best adapted to any given environment have the best change to survive and produce offspring. In this way certain biological features promoting survival become more and more prominent.

The male birds with the brightest colors have the best chance to attract the female birds. The flowers with the brightest colors are best seen by the birds and insects carrying the pollen from flower to flower. The fossil record seems to underwrite a development of life on earth. Older deeper layers of sediment in the earth's strata contain only traces of very primitive life forms or no sign of life at all. It is only in the upper layers of sediment, that we find more developed life forms. It is obvious that life on earth developed over many millions of years.

On what caused this evolving complexity, there is no definitive agreement at present. Darwin's theory of natural selection may well be only one piece of the puzzle. The theory implies that life on earth developed slowly by means of natural selection. If that is the entire story, life forms in the fossil record should reflect this, like a child's growing up photo album.

Instead the fossil record appears to show sudden leaps forward. In between these spurts of rapid evolution, there are many millions of years, with nothing much happening. This might be because the fossil record is more like a book with most of the pages still missing. What we do see is that life was evolving.

Whether it happened by fits and starts or if it was a smooth upward graph, is still open to debate. The evidence is overwhelming that life on earth evolved over many millions of years. That cannot be disputed. Immense damage has been done to our witness as Christians by foolish attempts to prove science wrong. Most responsible mainline churches have no quarrel with science on this matter.

In the upper younger layers of the Earth's crust, the dramatic Cambrian explosion can be seen. This was the appearance of all modern anatomical lifeforms some 500 million years ago. It is best demonstrated in the Burgess Shale in the Canadian Rockies, but this pattern is repeated worldwide. We have no certainty what led to this much greater complexity of life forms, appearing in such a relatively short time of a few million years during the Cambrian era. 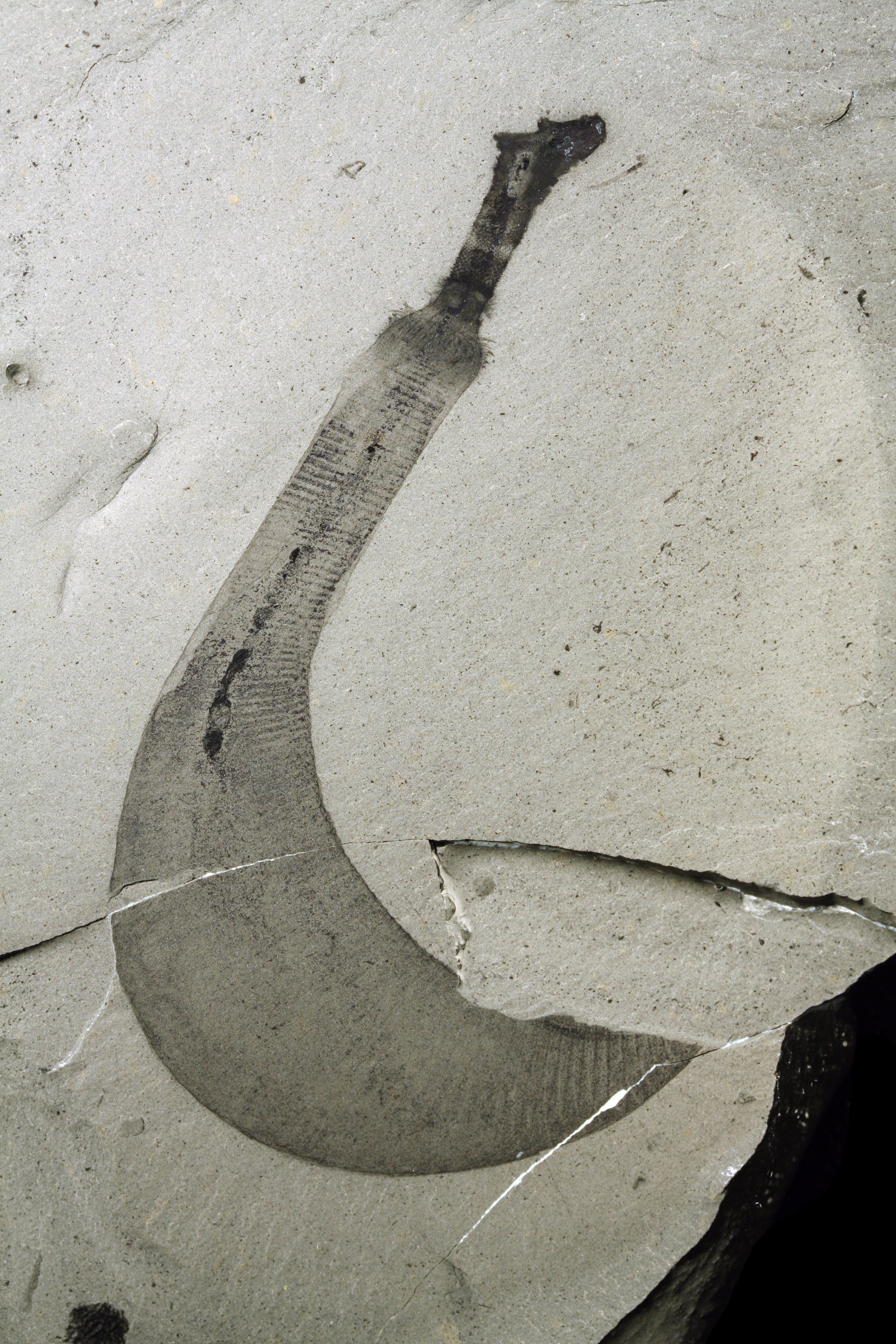 Ottoia, a soft-bodied worm, abundant in the Burgess Shale

Someone like Harvard’s Stephen J. Gould argued that the appearance of more complex life forms resulted from sudden catastrophic events. When you are in trouble you better act fast. Some cats navigate the floor collapsing and come out on the other side. It sounds like pure Darwin but there is a difference. It is more like saying we are a bunch of lazy cats. We will not do much, unless the floor is collapsing. Gould argued that the millions and millions of years in the fossil record, with nothing so new or dramatic appearing can be explained by this. Life was good.

Where the fossil record shows the appearance of an abundance of new lifeforms, there is a sudden break. This sudden break and the infrequency of these breaks led Gould to believe that it resulted from planet wide catastrophes. Life on this planet was literally forged in the fire. And said Gould: If you run the process all over again, the changes of us emerging from it again is just about nil. We simply will not make it again. Too many odds.

Darwinism is far from the whole picture. It has more the characteristics of some of our modern political ideologies, with elements of truth, but also gross over-simplification. Fundamental to the theory is a belief that given enough time it was almost unavoidable that life would develop by way of natural selection to where it is now. Survival of the best adapted individuals gave you the best outcomes. The result must have been us or something like us. Our eventual existence was simply inevitable, with no need for God.

The very fact alone that there is so much disagreement amongst scientists about how the process is working, shows that Science is far from a final answer. The only thing that we can know for sure is that life on Earth evolved over millions of years, but no one can say for sure what is fueling this ever upward drive towards greater complexity. We only have bits and pieces of the answer, and this calls for more humbleness on all sides.

In Gould's view the gaps and the leaps in the fossil record undermined some of the certainties of classical Darwinism. Natural selection happened but it is not always visible in the fossil record. Often just sudden dramatic changes in life forms triggered by what might have been catastrophic changes in the environment. If you run the process all over again, the outcome will be very different, said Gould. With so many uncertainties, you cannot expect the same result again. Life on this planet was forged in a storm and the odds of us arriving on the scene was almost nil.

Gould was not a believer, and he resented Christians using his arguments to disprove evolution. He was as much an evolutionist as Darwin. The point here is not that Science is wrong, rather no one in the scientific world can say with certainty what it is that made us such riders of the storm. The door is wide open for the belief that God had everything to do with our being here. What is causing this rising complexity might be different phenomena at different levels, but there is no evidence to exclude God from this process.

I doubt if anyone will ever have such evidence. We simply don't know enough. We must not expect science to fill the gaps of what we do not know with God, until someone comes up with an explanation. That is not the purpose of Science, and neither should Faith. Like how for the ancients the moon and the thunder was god or the gods until Science proved otherwise. No. Science is fully entitled to continue searching for an explanation for the rising levels of complexity. So is the faith.

The idea that it is a mere coincidence that we are what we are now, I find highly unlikely. We were pretty much pre- planned. We were on God's mind before he made this universe. Not that I am so naïve to think, that on a day we are going to find the evidence for that in a laboratory or in a layer of sediment with fossils. God is not like a clumsy thief leaving his fingerprints all over the place.

It is more a gut feeling that someone much smarter than ourselves (and we can be smart) was around for a long time on this planet. When catastrophes strike like now with this COVID-19, it is comforting to believe in angels. How God is pulling the strings behind the curtain (or on the stage) we simply don't know. Even the ability to recite the entire play (which we cannot now do) does not mean there is not a playwright.

Does this mean the Bible is wrong to say God created the earth in six days? The Hebrew word used is yom (יום). It means a 24-hours day. The Word truly became flesh. The author had a 24-hour day in mind. God was heard by the Israelites within their understanding of the world, long before science and T-Rex being household words. In the ancient world, there was no proper distinction made between the Creator and the created world. The gods were seen as part and parcel of this universe. The message of Genesis was unique and distinct. God created everything by merely speaking the Word, and He did it in six short days. Days or billions of years, how slow or fast, or by what process, why does that matter? God did it.

Adam is a Hebrew word for man. It is not to say that it must be understood as the name of a specific person, although traditionally Christians understood it as so. Scripture can simply be understood to say God made man. Of critical importance is that the word adam comes from the Hebrew noun adamah אדמה, which literally means red clay or earth. Man was taken from the earth. Scripture says, God made man out of the dust of the earth and the woman out of a rib from (the) man. Eve means life or living one. 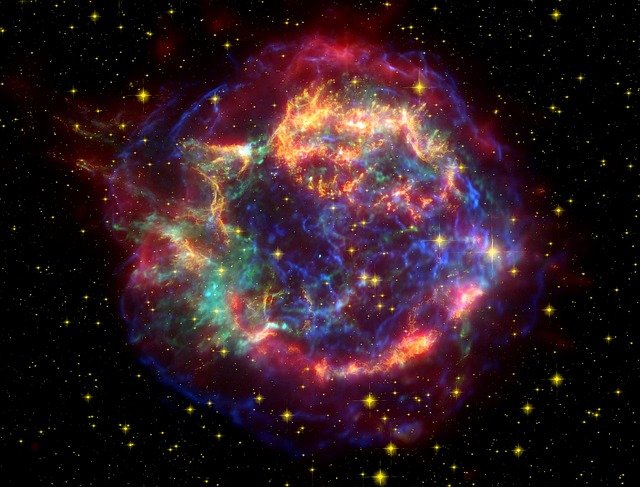 Cassiopeia A, a supernova remnant

To me the lesson here is that we were made from the material stuff of this planet. The details of how it was done, I can leave to the sciences of Biology and Chemistry. If we came from the stuff of this world, what then is the big deal to say there was this slow upward march of life? I see no conflict between us evolving and God creating us. God is not a magician in a circus pulling rabbits out of a hat. We were made over an immense period of time, through a complex process. This alone should leave us in awe before God. We are made from carbon, an element that was formed in exploding stars. We are stardust, and we are God’s children.

I learned from both Science and Theology, that we designated as General and Special Revelation within our Reformed Dogma. A fundamentalist insistence of the one over the other, has done much damage to the proclamation of the Gospel. A good dose of humility on both sides will take us much further. Karl Popper famously said: "our knowledge is finite but our ignorance is infinite".

The ability to live with mystery is a key part of drawing nearer to God.

Who do you say is Jesus?

Billions of words have been written about Jesus. No person has ever provoked more discussion about himself than Jesus.

Now in the church the talk is revitalization. By that we mean growth both in numbers and in our own spiritual depth.

We have made the difficult decision to temporarily suspend church service. Our mission remains to use the tools God has given us to continue our work.

Encountering God in reason and revelation

The ancient Greeks were of the opinion that human reasoning should lead to the logical conclusion that God exists.